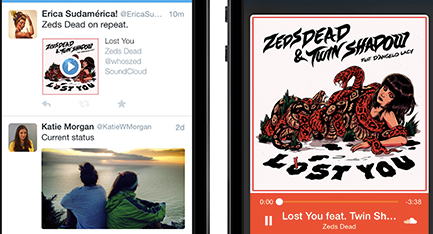 Late last night Twitter announced Audio Cards – a new addition to your Twitter stream which allows you to listen to music and podcasts directly from your stream on iOS and Android devices. Furthermore when you so happen to find something that you like you can dock it and continue browsing Twitter while it plays in the background.

Apart from the convenience of this – this is a great new bit of news for the tech savvy business owner. Let’s say you own a restaurant which has a live band/live music. You can, and should, record the show for SoundCloud, and then tweet it out to all your followers who can now use the new twitter audio cards to listen to the show. You’re getting more interactions and exposure on social media; and you’re followers are enjoying the music.

The same applies to recording artists and musicians of all levels. You’re followers can now listen to your music that much easier – and new followers can quickly determine if they’re fans or not.

Currently Twitter is partnered with SoundCloud and iTunes for audio cards.